Women who believe they should be treated like queens…they are right. Then there are women who are thought of as the ultimate queen…a Queen Bee. A term that could be taken negatively or positively. I like to think of it in positive terms. I like to think of a Queen Bee as a woman who is empowered, who is a leader, who has going on and does all backwards in high heels (kind of like Ginger Rogers). Ok, ok high heels not required, I personally don’t like them, but nonetheless, a Queen Bee simply kicks butt.  I decided to make a mixed media shadow box art honoring the Queen Bee.


Besides being passionate about arts and craft, period, I really enjoy creating shadow box art.  I like to alter deep stretched canvas, and deep picture frames and make them into a shadow box. So far I have not used a real shadow box.  For the canvas I do more of a reverse canvas technique to make it look like a shadow box. The front of the canvas becomes the backing of the shadow box, and the back opening is wood frame that the canvas is stretched over. I use that opening to hold the various artistic pieces and embellishments.
How it’s made
This is a reverse canvas. In this case I cut the backing (originally the front of the canvas) and folded over and painted it with gold metallic paint. I painted the box with Martha Stewart purple pearl paint. I stenciled the "faded dot" design by Tim Holtz with textured paint. I decorated a woodchip board with scrapbooking designer paper and used various embellishments and used as backing for the box. I painted the chipboard purple, used glitter and stenciled a honeycomb shapes using textured paint. I added Prima swirl bling and pearls throughout the box.  I made the “B” out of clay and spray painted with glitter gold paint.


The crown is a pendant from the Landing Bead. The crown is a semi-circle shape, which was perfect for this piece, since I am only displaying the front. The pillow that the crown is sitting on made out clay and I painted with purple and gold paint and glued gold trim around it. The little platform that the pillow sits on is also made out clay. I wrapped a purple ribbon to give it a regal look. I printed a picture of Queen Mary, just love the image, the vintage look, her pose.
On the outside of the box, I used various embellishments. The flowers that are not made out of metal are from Prima, Recollections and Spare Parts. The key is made out wood and painted gold. The clock, cameo, dress form, fleur de lis is made out metal. The top of box is covered with lace and used a pearl trim throughout the front of the box. The queen bee image located on the top right was printed from the internet on card stock paper. I glued a glass pebble over the image using Modge Podge Dimension Glue. I decorated lace around the glass. Hope you enjoy my Queen B piece. 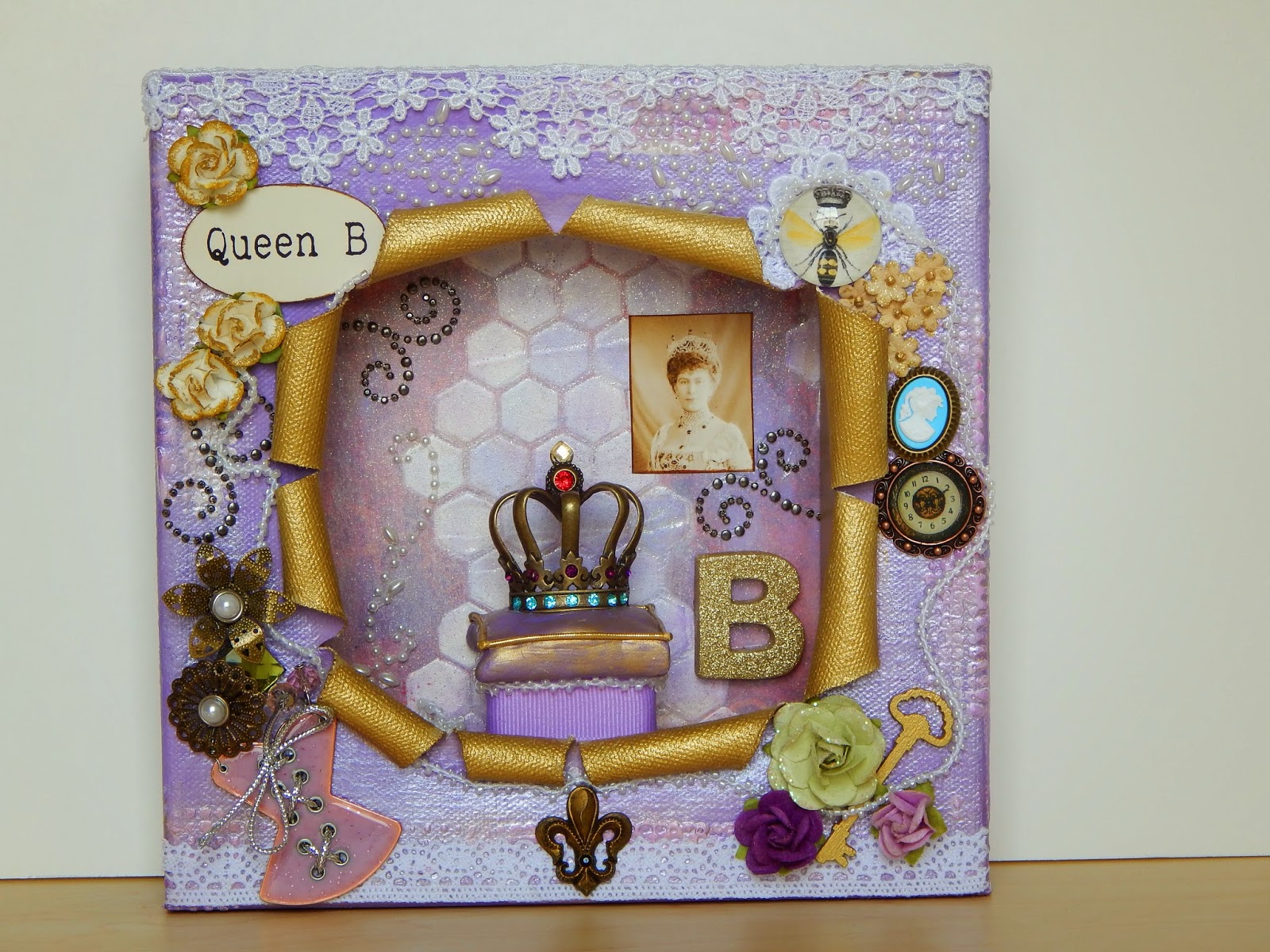 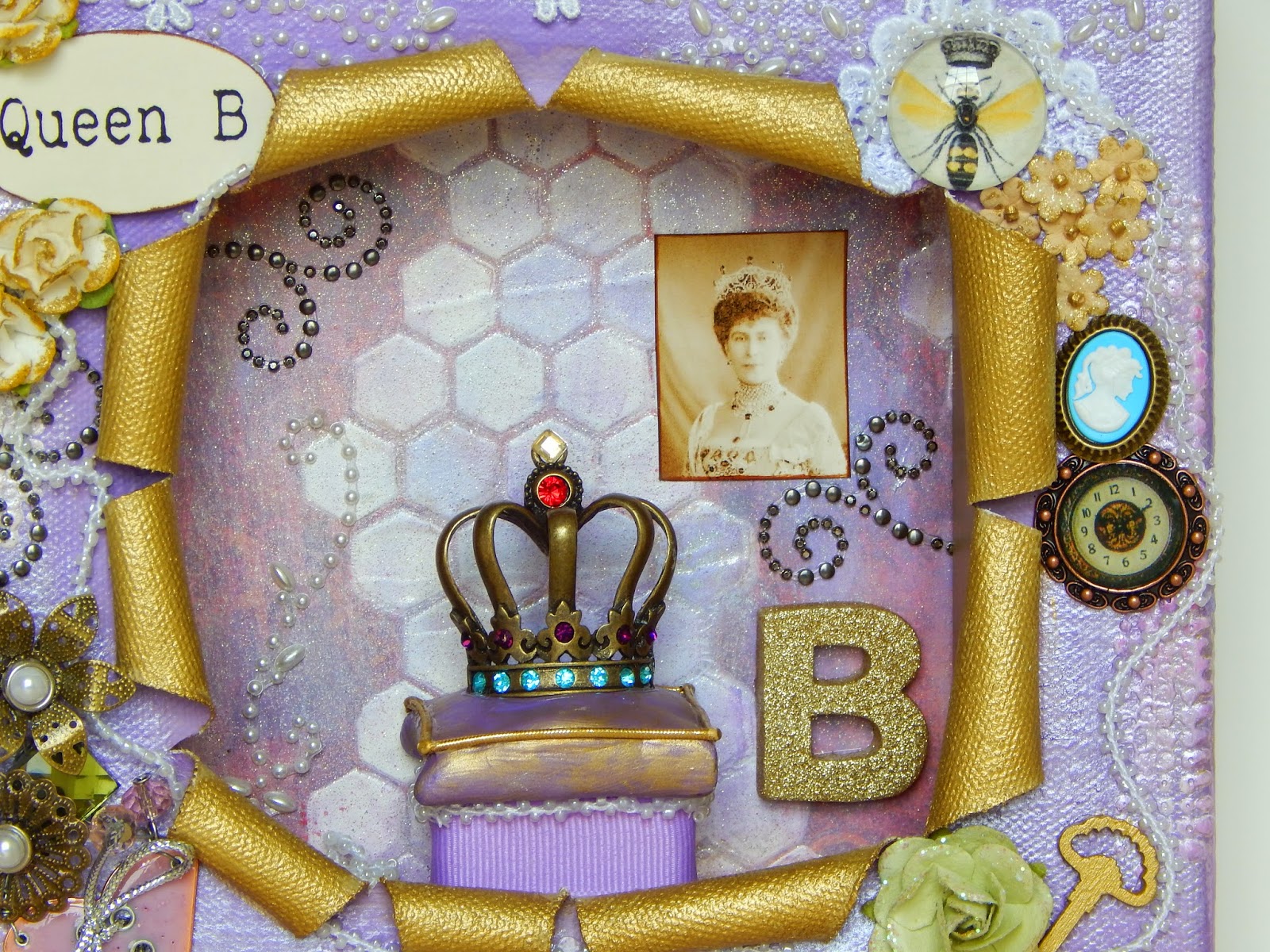 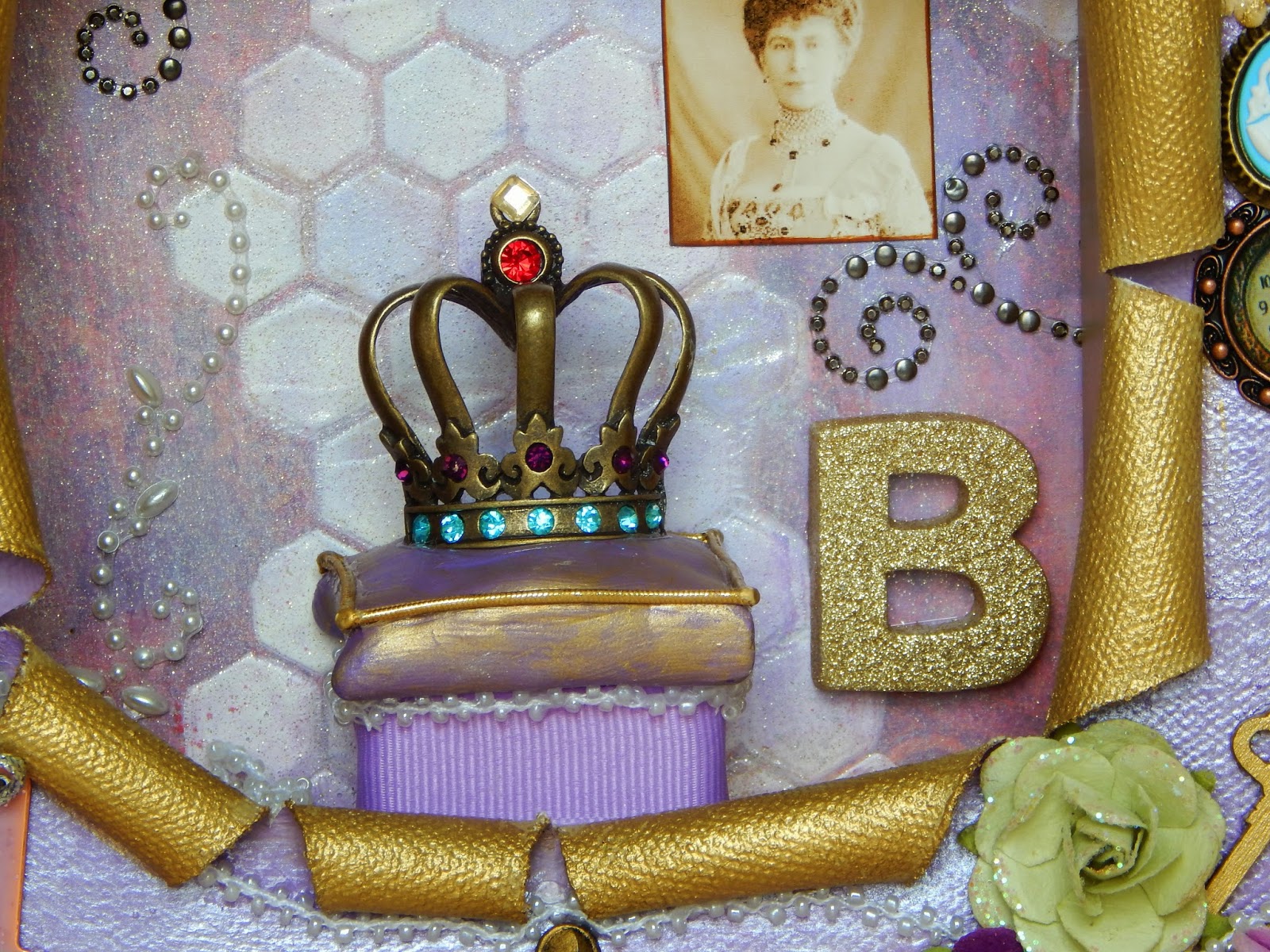 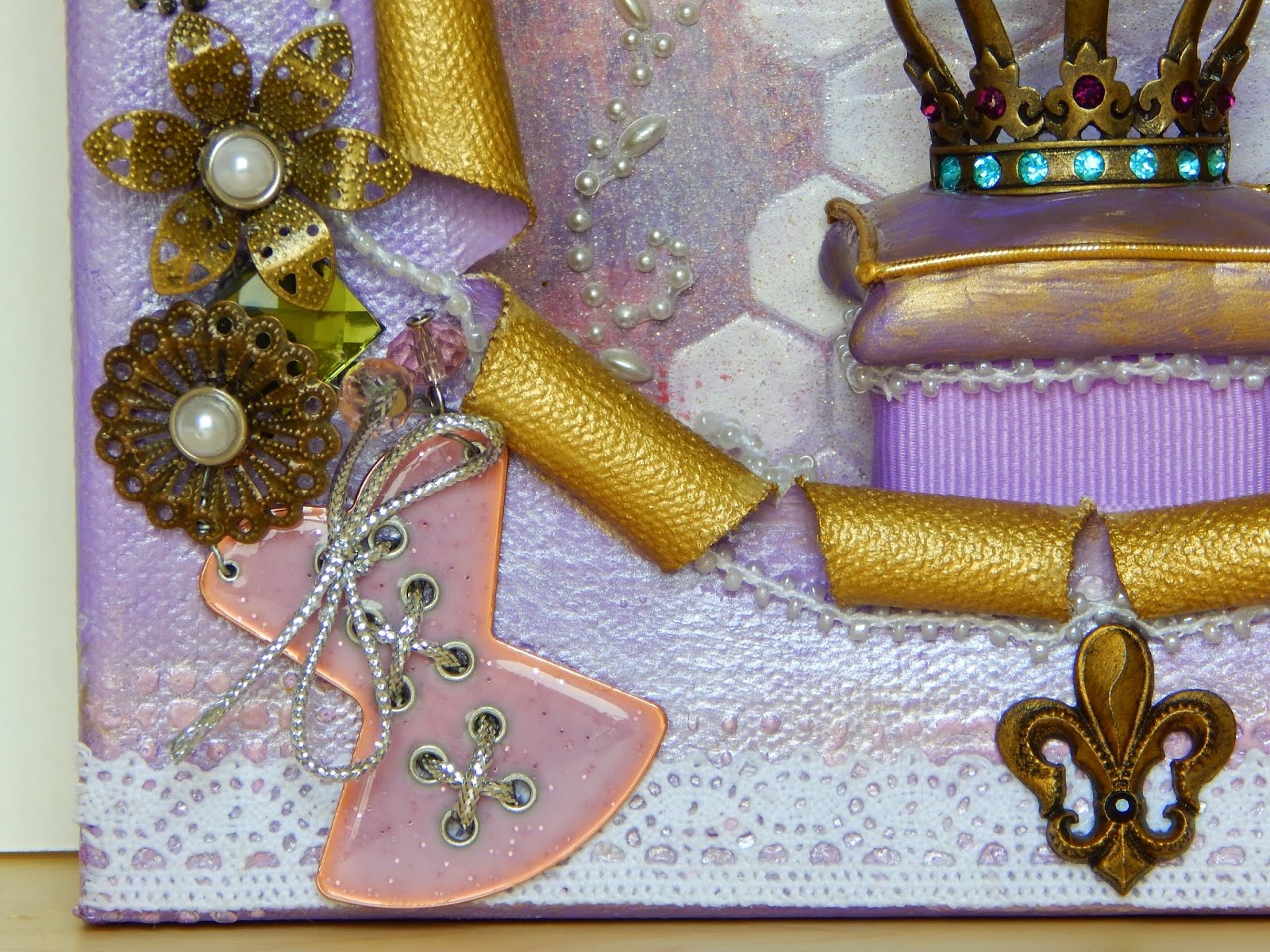 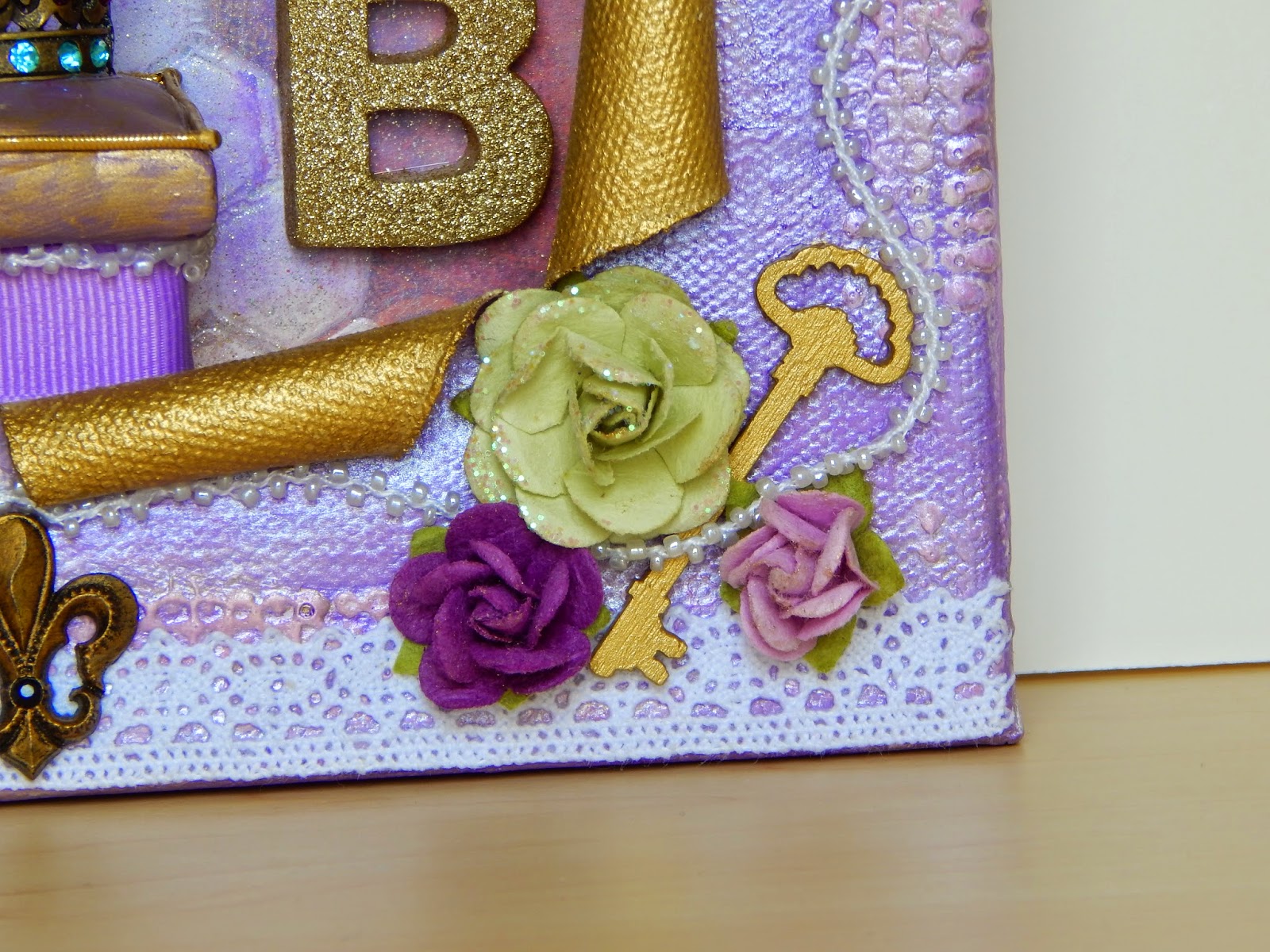 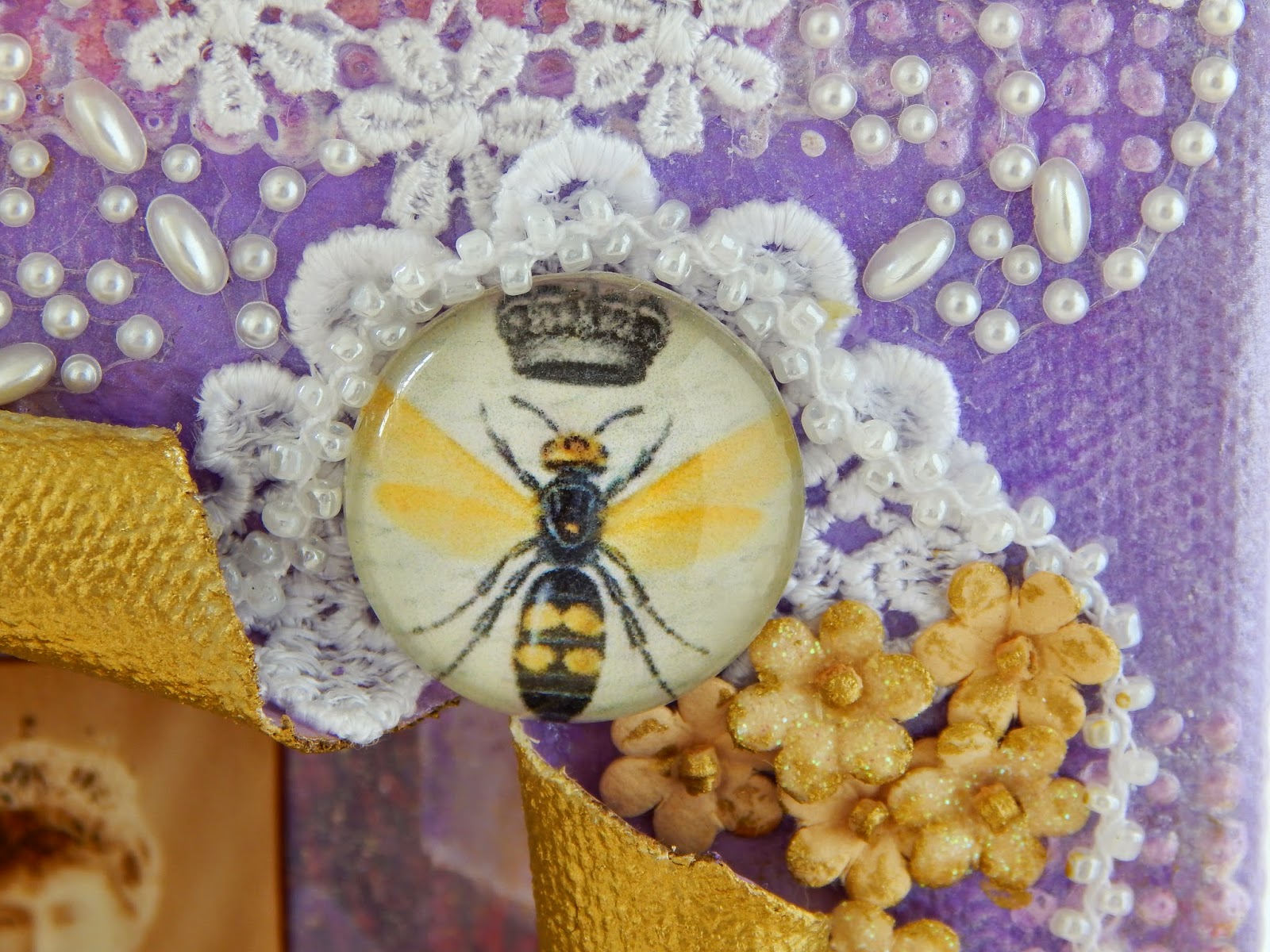 Email ThisBlogThis!Share to TwitterShare to FacebookShare to Pinterest
Labels: Assemblage